The annual Huguenot Service took place at St. Patrick’s Cathedral on Sunday 23rd November at 3.15pm.  There was a good attendance and the service, as always, was very beautiful. The choir sang the Huguenot Anthem, composed by David Leigh on a text by Canon Charles Mullen.

The Reverend R.C. Reed preached the sermon which celebrated the contribution of the Huguenots to Ireland and drew parallels between their situation when they fled from France and that of refugees today.  Prayers were said by the Chaplain of the Irish Section, the Reverend Conor Harper, S.J. and the readings were given by members of the Huguenot Society.  After the service, members of the congregation were invited back to the deanery where they enjoyed tea and a chat with old friends and new acquaintances.

We would like to take this opportunity to thank Dean Victor Stacey for his hospitality and for arranging the wonderful Service that we all appreciated and enjoyed so much.

We were blessed with wonderful weather for our tour of Mount Jerome Cemetery on Sunday 14th September.  Our fantastic guide, Ray Bateson, led us through the cemetery indicating a number of resting places of famous past citizens of Dublin along the route.  This is the only cemetery in the city in which deceased spouses of mixed marriages could be buried together.  Ray taught us about the types of monuments favoured for both Protestant and Catholic graves and the meaning behind different symbols used, from flowers to wreaths and broken columns to celtic crosses.

Ray also showed us the best (and worst) methods for reading the gravestone inscriptions and taught us about the tree-lined pattern used for the layout of the cemetery.  We also learned how to recognise mausoleums, Egyptian style and classical Roman style monuments and all about the methods used to avoid body-snatching in centuries past.  Ray’s passion for his subject is infectious and everyone thoroughly enjoyed his many anecdotes along the route.

Anyone interested in reading more about the subject can find Ray Bateson’s excellent books on the topic here.

Our thanks go to Elizabeth Bicker and to Albert Fenton who organised this really interesting event for us.  All agreed that our tour of Mount Jerome was far too short and we hope to return another day to learn more about this beautiful cemetery that is the last resting place for some 300,000 former citizens of the city.

We are delighted to report the good news that Lisburn Memorials Trust has been awarded £82,800 in support by the Heritage Lottery Fund.  This money will be used to help fund a scheme for the conservation of memorials commemorating Huguenot and Linen families located in the precincts of Christ Church Cathedral.

Chairman of Lisburn Memorials Trust is Mr. Harvey Bicker and we congratulate both Harvey and the Trust on this excellent news.  Click here to read more.

We are very fortunate to have one of our committee members (Dr Marie Leoutre) currently working at the National Library and we were even more fortunate to be offered the opportunity to avail of a guided tour of the library in May.

The National Library of Ireland in Kildare Street was looking very splendid for our visit.   After sharing a short history of the building with us, we were brought up to the registration area by our guide and shown how to get a Reader’s Ticket – which is entirely free of charge.

To obtain a Reader’s Ticket that is valid for three years and gives you access to all the library’s collections, simply bring along photographic ID, fill in an online form on the computer in the Registration area and get your picture taken in the Main Library. Your Ticket will be printed for you there and then.

Our guide next led us to the main reading room. This is an architectural gem and, with the sunlight streaming through the high windows, it was looking its best and there were many eager researchers hard at work there when we arrived.

There is an area with computers to the left as you enter the reading room and our guide, Marie Leoutre, gave us a demonstration on how to log on, find the correct item and make arrangements to view it.  All very straightforward, we all agreed.

The search can even be undertaken from home before you plan your visit.  To find what you are looking for, check the online catalogues: http://catalogue.nli.ie/ and http://sources.nli.ie/.  Each item has a unique Call Number (for example, MS 49,674, 16 F 10, or Ir 2365 g 1) and you will find that number at the bottom of the page.

To request material, fill in up to 5 dockets at the counter and the staff will bring the items to you at the next delivery time. Delivery times are spaced evenly through the day, just ask at the desk for details.  Alternatively, you can use the online order form to request material ahead of your visit: http://www.nli.ie/en/online-order-form.aspx

Our next venue was further along Kildare Street at the Manuscripts Library, where Marie had arranged for us to examine three volumes and a folder of ancient manuscripts.  Several familiar Huguenot family names leapt from the pages and members of our tour-group spent a lovely half-hour perusing the manuscripts and wondering at the fascinating amount of hidden gems of information that are safely kept behind the walls of our national library.

We are very grateful indeed to Dr Marie Leoutre for making the arrangements for our visit, which was much enjoyed by all.  As one of our members commented, “I have often walked past here, but had no idea of the riches contained within!”

We have learnt with regret of the death of David Pyle, a former Fellow of the Irish Section.  David was a direct descendant of Captain John Norcot D’Esterre, who fought a duel with the Irish patriot, Daniel O’Connell and was fatally wounded.  D’Esterre’s widow,  Jane Lucretia, married John Grattan Guinness, and a son of theirs, Henry Grattan Guinness, became a famous preacher on both sides of the Atlantic.  David Pyle was the brother of the late Fergus Pyle, a former editor of the Irish Times.  Members may recall that his sister Hilary Carey, a former art critic for the Irish Times, has attended some of our recent events at the Royal Hospital.

The day began with a short introductory address on genealogy by Dr. David Butler.  He was followed by Dr. Alicia St. Leger who provided an overview of Huguenot history and discussed why some of these French refugees eventually settled in Cork.

The two main speakers were firstly Ann Walls, whose husband David is related to the Huguenot Perrier family, and secondly Hazel Fleury whose husband Jonathan is descended from Huguenot settlers in Ireland. Each provided a fascinating and well illustrated presentation on their Huguenot links.  They combined information about the wide ranging history of the Perrier and Fleury families, with informative insights into their own efforts to trace family connections.  Their talks were much appreciated.

The day concluded with a visit to the Huguenot Burial Ground on Carey’s Lane, which was specially opened for the occasion.  The Huguenot Day proved to be a great success and thanks are due to all who were involved in organising it and also to those who attended. 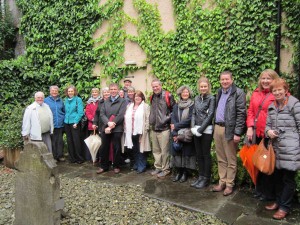 Some of those who attended the Second Cork Huguenot Day pictured in the Huguenot Burial Ground on Carey’s Lane, Cork.

On April 5th, the Irish Section of the Huguenot Society of Great Britain and Ireland held its 27th Annual General Meeting at the Royal Hospital, Kilmainham, in Dublin.

Following the AGM, the Society welcomed Brigadier General ‘Sandy’ Saunderson, who gave a very interesting talk about the work of the Military Heritage of Ireland Trust.  The Trust was formed in 1990 and was supported by former President Mary McAleese and the Irish Government.  This all-Ireland Trust has a membership of serving and retired military officers and military historians and has connections with museums country-wide, as well as to regimental associations and universities.  They give an annual prize for a piece of research by a student  and have published three major books on military topics, the most recent being “Earth Voices Whispering” which is an anthology of Irish war poetry 1914/45.

The Military Heritage of Ireland Trust had an input into the planning of the momentous visit of Queen Elizabeth to Ireland in 2011, and of the return visit of President Michael D.Higgins to the U.K in April 2014.

The new website www.militaryheritage.ie will enable the general public in their efforts to trace relatives who served in the military and it is hoped that it will also foster greater interest in military history and the part played by Irish men and women in Irish, British and U.N.service.

A transcript of the talk by Brigadier General Saunderson can be read here.

Following our talk, members repaired to the restaurant in the Royal Hospital and enjoyed the opportunity to discuss the morning’s events over a bite to eat.  We are, as ever, grateful to our Hon. Secretary, Elizabeth Bicker, for having organised another very interesting and enjoyable day for members.