On Sunday 20th October 2019, members gathered at St. Patrick’s Cathedral in Dublin to attend our annual service to commemorate the lives of Huguenots who fled persecution and sought refuge here in Ireland.  Our speaker this year was Dr Jason McElligott, whose very interesting talk focused not just on those refugees whose names are often mentioned today for their achievements, but on the many others who struggled to find a foothold in a new home and new society.  He also spoke about Elie Bouhereau, the French Huguenot refugee, who became the first librarian of Marsh’s Library. The tercentenary of his death is being marked by a conference which will be held on the 15th, 16th and 17th of November at Marsh’s Library in Dublin.  You can read more about the Bouhereau Conference here.

NOTE: Irish Section Members are cordially invited by ‘The Chair and Members of the Irish Manuscripts Commission’ to attend this launch on November 16th.

You can read more about the Book Launch here.

Following the service, the Very Revd. Dr William Morton, Dean of St. Patrick’s Cathedral, along with his gracious wife, Rosemary, very kindly invited members to share in refreshments at the Deanery, for which invitation we were very grateful indeed.  It afforded us an opportunity to meet together for the first time since the sudden and unexpected death of our Chair.

As a tribute to Dr. Gilmartin, his good friend Martin Bernon wore the Huguenot tie and Medal of Office that have kindly been passed on to the Society by Dr. Gilmartin’s family.  He addressed the members assembled at the Deanery and offered some personal memories and thoughts about John, allowing us all the space and time to recall our own experiences of spending time with a man we will all remember with much fondness.  We finished by raising our glasses to the memory of our absent friend.

The Medal of Office which was commission by Dr. John Maiben Gilmartin and which will henceforth be worn by future Chairpersons of the Huguenot Society, Irish Section, has been placed in a safe until such time as a new Chair of the Irish Section has been appointed.

We were very sad to share news with members of the death of Dr John Maiben Gilmartin during the summer.  In his time as Chair of the Irish Section, John made visits to London to meet up with our colleagues,  led two tours in Ireland, to the Waterford Treasures Museum, and in Dublin to the newly refurbished National Gallery of Ireland.  He was, as a committee member, an enthusiastic supporter of previous outings to Portarlington and Lisburn and we will miss his warm and generous personality.

We have received some lovely tributes which you will find below.

“John was one of life’s true gentlemen, and a friend who shared my passion for the arts.  He had a depth of knowledge which frequently surprised me, and the ability to deliver it in a way which only he could. I am sure that we in the Huguenot Society will be but a fraction of those who miss him.”  Tommy Barr.

“Having John as a member of the Huguenot Society has been a true privilege for all of us here in the Irish Section.  From long before he became Chair, John was an eager contributor to the Society’s agenda, making suggestions for tours and helping with introductions and ideas.  On a personal level, I found myself constantly amazed and entertained in John’s company by his depth of knowledge on even the most obscure of topics.  But it was John’s ability to see beauty in all things that touched me most.  He recognised beauty in art, in buildings, in fabric, in tradition, in oration, in ceremony and in history and his interest in these was matched only by his genuine interest in other people and their lives and their own interests.  We are so much the poorer to have lost a great member and a wonderful Chair.”  Vicky La Touche-Price.

“Our chairman, John Maiben Gilmartin, was one of the last of his kind. A true gentleman, beneath his initial shyness were troves of knowledge, a boundless love of art and a great ability for storytelling, all of which he was glad to share. His company was up-lifting and can simply never be replaced.”  Marie Léoutre.

“It was with real sadness that I heard in July of John’s passing. I first met him after the annual Huguenot Service in St Patrick’s Cathedral, in about 2012, accosting him and as he walked over to the reception in the Deanery with a friend. I was intrigued by this tall, courtly gentleman and promptly invited him to join the Irish Section, one of the best decisions I made during my tenure as chair.

With his enthusiasm, his knowledge and his contacts, John was a really valuable addition to the Irish Section. He joined the committee in 2013 and opened up rich new avenues for exploring our heritage. Thanks to him, we made a memorable trip to Waterford in 2015, which included a guided tour of the building which used to house the Huguenot church and a tour of Waterford Museum, led by the director. John was on the board of the museum and a friend of our guide to the ruined church, but he was content to leave centre stage to the speakers and I was touched too by his unobtrusive care for the exhibits in the museum.

I also remember the delight of our visit to the National Gallery, led by one of the curators and made possible through John’s contacts as President of the Friends of the National Collections of Ireland. John was always willing to contribute to the work of the society, by giving a talk about a Huguenot item he had acquired, as he did at the Gathering in the refurbished Lady Chapel in 2013, or with a suggestion for a new member or a possible speaker. His enthusiasm was infectious and his courtesy unfailing. We are the poorer for his passing, but the richer for the time we had with him.”  Dr Jane McKee.

Note: Any other members who wish to leave tributes here to Dr Gilmartin are very welcome to send these to our Hon. Secretary, Elizabeth Bicker. 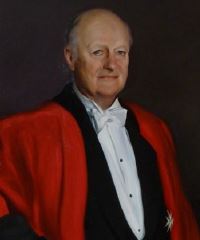 On Saturday 25th May 2019 the Annual General Meeting of the Irish Section was held at Marsh’s library, Dublin, by kind invitation of the Director and staff.

Following an opportunity for members to catch up on news over coffee and cake, the AGM convened under the chairmanship of Dr John Maiben Gilmartin.

After the business of the AGM had been concluded, we were treated to a fascinating talk by our guest speaker, Professor Ruth Whelan, Professor of French at Maynooth University.

The professor presented “The hidden life of a manuscript letter (by René Barraud de la Cantinière)”. A single, original clandestine letter from the 17th Century, many times since copied and shared, told the horrifying story of the unfortunate Huguenots who were forced to work as galley slaves on ships in the Mediterranean. The letter also revealed details of a network of contacts throughout Europe who worked silently, at great personal risk, to support and assist those Huguenots who had been captured by the forces of the Crown during those shockingly cruel times.

Professor Whelan shared how careful analysis of the letter and its copies could, centuries later, tell us so much about the history of the Huguenots, the regime under which they were held and tortured and about the psychological resilience they constructed on the basis of their spiritual life. Intriguingly, the nineteenth-century copyists of the letter redacted from their transcriptions the prayer Barraud composed on the bench of the galley and integrated seamlessly into his letter to Jean de La Place, sieur de La Sauvagerie, a refugee pastor resident in Rotterdam.

Centuries later, the letter and the history of its transcriptions reveal more than the imprisoned writer could ever have hoped to share when he risked his life to write and then send that folded sheet of paper. Read by different readers in different social and political contexts, a letter that was vital to the ongoing survival of the French Protestant galley slaves turned into a historical document; it was rescued from oblivion but the vital connection to the mystery of the living was lost.

Our group was held spellbound as the Professor unveiled clues and presented evidence to build a picture of the remarkable life of that one letter, whilst simultaneously illuminating the remarkable lives of the many who suffered and of the wonderful network of those who sought to extend their help.

Photo: (L to R) Prof. Ruth Whelan, pictured with Dr John Maiben Gilmartin, Chair of the Irish Section of the Huguenot Society of Great Britain & Ireland, in the garden at Marsh’s Library, Dublin, May 2019. 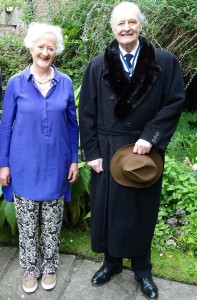