The Huguenot cross is commonly seen at Huguenot events in Ireland and around the world. It is often worn as a badge or as a pendant on a neck-chain by ladies and the neck-tie is a popular choice amongst gentlemen.

There are many and varied stories of the early origins of the cross. It is very rich in symbolism and came into general use amongst Huguenots following the revocation of the Edict of Nantes in 1685.

Four triangles meet in the centre to form the cross, with the eight rounded points at their tips signifying the eight beatitudes. The four arms of the Maltese cross formed by these triangles are sometimes regarded as the heraldic form of the four petals of the golden yellow iris, or Lily of France. The lily is considered a symbol of purity and the arms of the cross also symbolize the four gospels. The arms are joined by four Fleur-de-lis, each with three petals, symbolizing the Trinity and making a total of 12, signifying the 12 apostles. The open heart-shaped spaces between the Fleur-de-lis and the centre of the cross are the symbol of loyalty. From the base of the cross, a dove descends – signifying the Holy Spirit.

There is a romantic story that, of course cannot now be confirmed, about the origins of the Huguenot cross. Four young Huguenot couples were to be joined in marriage in secret. On the day of the wedding, two of the couples were captured and given the choice to become Catholics or die at the stake. They refused to give up their faith and all four were burned to death on their wedding day while they sang psalms. It is thought that a metal-worker who witnessed their death designed the Huguenot cross with elements that recalled this sad event. The heart-shaped spaces between the arms of the cross are said to reflect the love of the two couples and their loyalty to their faith.

Badges and ties depicting the Huguenot Cross can be purchased at Huguenot events in Ireland. 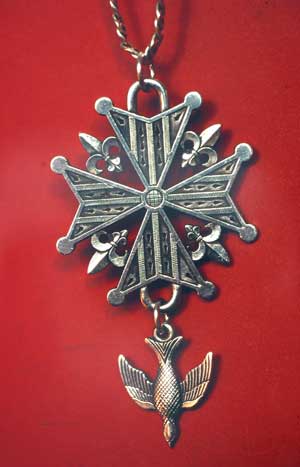 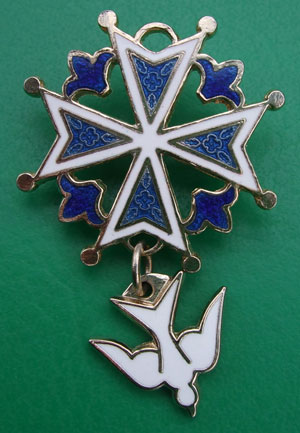